In 1984, I participated in a recipe exchange by mail and this is one of the recipes I received.  There are a lot of versions of this dessert with a lot of names, but since Robert Redford still looks good to me, I’m keeping it.  This is an easy dessert to assemble, should be made ahead of time and chilled, and is very rich and delicious.

THE NEXT BEST THING TO ROBERT REDFORD

To Make the Crust:

To Make Filling and Assemble:

Layer 1: Beat cream cheese and sugar until fluffy.  Fold in 4 ounces (half of an 8-oz. carton) of whipped topping.  Spread over cooled crust.

Layer 2: Mix vanilla pudding and 3/4 cup of milk until thickened.  Spread over Layer 1.

Layer 3: Mix chocolate pudding and 3/4 cup of milk until thickened.  Spread over Layer 2.

Grate the block of milk chocolate over the top of the dessert and garnish with whole toasted pecans.

Refrigerate for at least one hour before serving.

This dessert won a ribbon at the Hamilton County Fair (Cincinnati) in 1984 and has been a favorite dessert in our family ever since.

I’m so glad I took part in that chain mail recipe exchange. 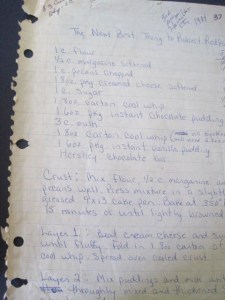 “Redford”, as we call it, was our dessert today when my daughters and grandchildren returned from swimming at Boomerang Bay (Kings Island, Mason OH).  We had another old favorite for lunch – Mom’s Tuna Melts.

4 thoughts on “The Next Best Thing to Robert Redford”