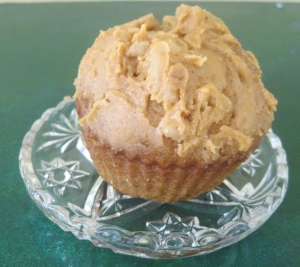 I adapted this recipe from one found on Veronica’s Cornucopia for Wacky Pumpkin Spice Cake.  Without eggs or milk, this recipe makes a wonderful moist, soft cake.  Veronica used a Maple-Cinnamon Glaze* on her cake but I wanted to use a Pumpkin Walnut Fudge Frosting I had recently developed.  I cook the pumpkin puree over low heat for 2 minutes to keep it from tasting grainy.  This frosting made the cupcakes extra-delicious and rich.

In a large bowl mix together the flour, sugar, cinnamon, nutmeg, ginger, salt, and baking soda.

In a separate bowl, whisk together the pumpkin, water, oil, vinegar, and vanilla. 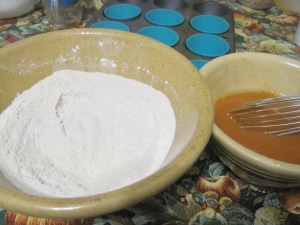 Whisk the wet ingredients into the dry until thoroughly combined. Spoon into the 12 prepared cupcake pans….. 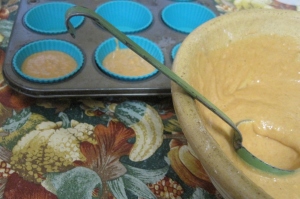 …. and bake for approximately 22 minutes, or until a toothpick inserted in the center of a cupcake comes out clean. 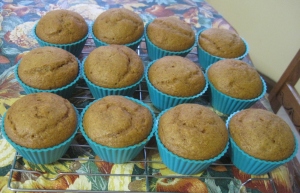 After five minutes, remove the cupcakes from the liners and allow to cool completely on a rack. 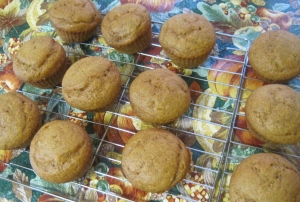 When the cupcakes are cool, frost with rich Pumpkin Walnut Fudge Frosting:

In a medium pan, place the pumpkin and cook over medium low heat (#4 on my electric range gauge) for 2 minutes, stirring constantly.  A non-stick pan is helpful to keep the pumpkin from scorching.  Add butter and evaporated milk and continue to cook over medium low heat until butter is melted.  Remove from heat and whisk in spices and powdered sugar until smooth.  Stir in nuts.  Cool.  Spread on tops of cooled Pumpkin Cupcakes.  Enough frosting to generously cover 12 cupcakes. 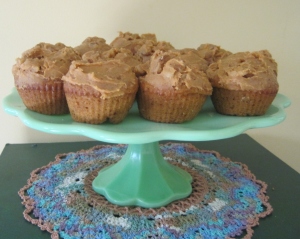 Mix all ingredients together until smooth.  Drizzle over cupcakes.