I  have so many wonderful collectibles acquired over the last 80+ years.  Some were gifts, some were part of my life growing up, some were inherited, some were purchased at antique malls, gift shops or thrift stores  – all are precious to me.  Some items are kept up year-around while others are brought out seasonally and on holidays.  Unfortunately, many priceless-to-me objects go undisplayed and unseen for years, so each week, I’m going to pull out an item and post a COLLECTIBLE OF THE WEEK.

These are two collectibles that I remember seeing over 80 years ago.  The parrot wall pocket (marked “Made in Czechoslovakia” hung on the wall of our one-room flat in downtown Cincinnati.  Mother had very few “collectibles”, barely getting by on my father’s WPA salary in the midst of the Great Depression.  I wish I had asked her where the wall pocket came from originally – probably one of her better-situated-financially aunts gave it to her.  I can remember when I was a toddler, Mother would take the wall pocket down and give it to me to hold while I fell asleep – kind of a security blanket.  She used to play a hand game with my little sister and me that involved a song about “Dicky-Bird, Dicky-Bird, fly away” and we called the wall pocket “Dicky-Bird”.  Mother would say, “Now, take Dicky-Bird and go to sleep”, while she sat nearby rocking my sister and singing one of her well-loved ballads like “Barbara Allen”.

Somewhere along the line the parrot was dropped and broken.  I don’t recall ever taking anything else to bed with me.

Mother was very proud to have owned a brush just for me and my curly dark hair, and kept it at hand to also brush my little sister’s straight blonde hair. 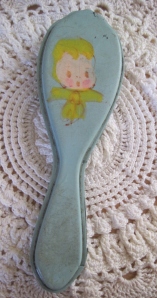 It’s made of metal and  the back shows a lot of brushing went on at our place.

What amazes me is that Mother managed to hang onto these two items through many moves, three devastating floods and for almost 60 years.  They were passed on to me when she died in 1991.

9 thoughts on “Collectibles of the Week–1930s Keepsakes”