I’ve been getting advance gifts from my daughters for my upcoming 80th birthday, but I was surprised by a wonderful gift from my blogging friend, Freda, at The Adventures of the Empress of the Universe.  Last week, she had posted a tutorial on making stilettos from turkey lacers to use in sewing – and she sent me one!  It’s so precious and will definitely be used.  Freda enclosed it with a card by one of my favorites, Mary Engelbreit.

To learn how to make these beautiful stilettos, go to Freda’s blog:

Thank you, Freda, for making my day.

Two years ago, Darlene and I were commenting on each other’s posts when she surprised me by asking if she could telephone me some time.  We were fellow Ohioans (she was transplanted from Indiana), separated by about 100 miles.  I agreed and that began two years of 45-minute phone conversations every Tuesday at 5 PM.  It was like having an over-the-back-fence conversation with a friendly neighbor.  We talked about everything – quilting, sewing, crocheting, cooking, family, our past, TV shows, favorite bloggers – there was never an awkward pause trying to think of something to say.  Darlene’s blog posts were full of LOLs and so were her phone calls – she was both interesting and interested and 45 minutes passed quickly.

A year ago, she told me about a lump she had developed on her jaw which she didn’t consider serious but the doctor insisted on further tests.  She was diagnosed with lung cancer.  She never stopped being fun, interesting, cheerful and optimistic.

We had talked about meeting at a halfway point somewhere but time went by and she became too sick to travel.  A month ago, Darlene said, “I guess we’ll never meet, but I’ll see you in heaven.”  I asked my daughter to drive me to Columbus from our home near Cincinnati and we spent a pleasant afternoon with Darlene, her husband, her dog Maggie, and her cat Pancho.

From that time, Darlene’s condition worsened and on our last phone call, even though her husband had to bring the phone to her bedside, she said she was doing “pretty good”.

Darlene’s husband called yesterday to tell me that she had passed away at 8 PM on Saturday night.

Tuesdays at 5 PM will never be the same.

My oldest daughter, who lives with me, loves to celebrate birthdays.  This is what I found on my kitchen table on Thursday morning. 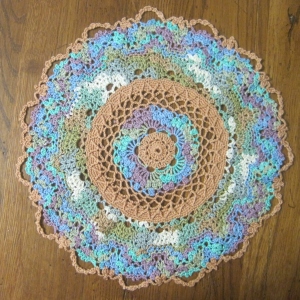 This is one of her hand-crocheted doilies in the most delicious colors – the picture doesn’t do it justice.

Last evening, I was telling my daughter that I had been disappointed not to find a mini-quilt rack on our recent trip to Amish Country in Holmes County, Ohio.  I have been seeing them in displays at quilt shows and in quilt shops, but there were never any for sale.  She suddenly left the room and returned with exactly the rack I wanted – she had managed to sneak it out of a shop and into the car while we were in Amish Country.  It’s designed to hold up to a 12×15 inch piece, just the right size for a mini-quilt that I’m already planning in my mind. 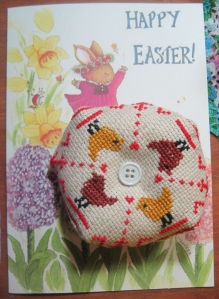 Today, I found in my mailbox an Easter gift from my blogger friend, Darlene.  She sent me a pretty card and a biscornu pincushion she had made.  I was familiar with this type of work only because Darlene had blogged about it with this web site as reference:

I learned from this web site that a biscornu is an interesting 8-sided little pincushion.  The word “biscornu” (sometimes written “biscournu”) is derived from the French adjective meaning skewed, quirky or irregular.

Darlene’s tiny cross-stitch work is so beautiful.  What a nice surprise!

After my father was gone in the 1970s, my sister (a die-hard round dancer) persuaded my mother to get out more and to take up round and square dancing.  Mother fought the idea for awhile, but finally got up the nerve to venture out on her own and met the most wonderful man who became her dance partner and a friend of the family for many years to come.  Norton was always the perfect gentleman, soft-spoken with a dry wit, a great dancer, and a good cook. 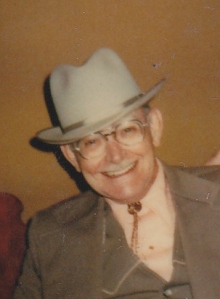 The dances were always the occasion for good food contributed by the club members and Norton’s favorite item to bring was his famous rum cake.  Although alcohol was strictly forbidden at dances, everyone looked the other way when Norton walked in with his cake.  Erma Bombeck wrote about the joy of being at a PTA meeting and having someone bring in anything with alcohol in it.  It was the same way at these teetotaler dances – everybody rushed to the table when Norton’s Rum Cake was there.

I don’t use cake mix very often, but it works so well with this cake that I’ve never tried anything else.  It’s delicious and easy to make.

To make the cake:

Place all ingredients in the large bowl of an electric mixer and beat at medium speed for 3 minutes.  Pour into greased and floured 10-cup tube or Bundt pan and bake @ 315 degrees F for approximately one hour until a tester inserted near the center of the cake comes out clean.

With cake still in pan, allow to cool on a rack for 5 minutes.

Run a knife around the edges and tube portion to loosen.  Invert cake onto rack. 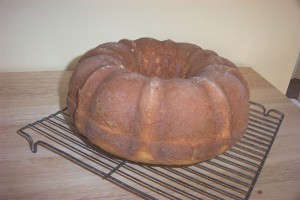 While cake is cooling, make the Rum Glaze:

In a small saucepan, melt the butter.  Then stir in the water and sugar.  Bring to a boil and let boil for 5 minutes.  Remove from heat and stir in the rum.

While cake is warm, poke holes in the cake with a skewer and pour the sauce over the cake.  It will take several minutes for the cake to absorb the glaze – just wait a few seconds and ladle on some more sauce until it is all used. 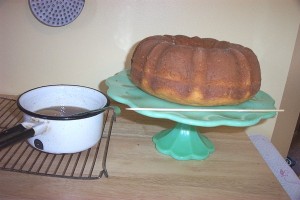 I would love to have one more chance to sit alongside my mother in her beautiful square dance dress with matching shoes and earrings, watching Norton as he smiles and accepts the compliments of all the dancers on his wonderful cake.

Yesterday, I found a package from my online friend, Darlene in Columbus, Ohio, setting by the front door.  Inside were three beautifully wrapped gifts.  The first one was this mini-quilt – she remembered I love scotties!

The next package contained a hand-crocheted bag for me to carry my books to the library.

The third gift was a delicious snack and an original Christmas card.

Christmas is so much fun with nice friends like Darlene.

Today I was invited to lunch by my oldest daughter and her long-time friend, S.E.  We met at the Silverton Cafe (Cincinnati),  home of extraordinary double-decker sandwiches. After we had ordered, S.E. handed me a beautiful gift box and this was inside: 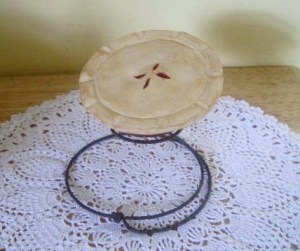 This 3-1/4 inch pie looks so good you can almost smell the home-baked aroma.  S.E. hand-carved this out of basswood and painted it in a very realistic way. 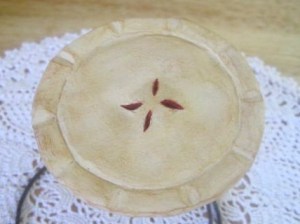 The holder was her ingenious idea of a piece of an old bed spring. 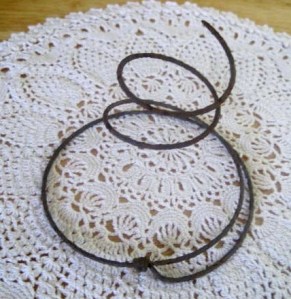 The carving and painting are beautiful front and back.

The gift is especially touching to me because S.E. remembered that I love to bake pies – a real treasure. 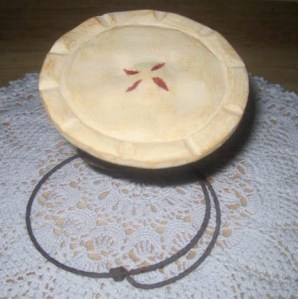 And the sandwich was delicious!

A couple of weeks ago when I wasn’t feeling very well, I went to the mailbox to find an envelope which contained this wonderful hand-crocheted pot holder and a pretty card which said, “I’m sending this to you as I thought you’d like it”.  It was a complete surprise from one of my favorite bloggers, Darlene, in Columbus, Ohio.  It’s amazing how this thoughtful gift immediately brightened my spirits and made me feel 100% better.

At the time, my digital camera had gone out on me, but I got a brand-new one for Mother’s Day and wanted this to be the first picture I took.

Darlene has a warm, friendly blog with news of her crocheting, quilting, family, dog and cat here.