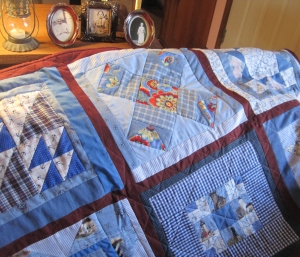 At Christmas time, I made lap quilts for three of my children but wasn’t sure the older son would want one.  Then, I decided he might like to have something to throw over himself and his two dogs when he naps in his recliner.  I wanted to use scraps and made his quilt using my 1920s Farmer’s Wife Sampler Quilt book.  I had made a wall hanging back in 2010 when I first received the book, but for this quilt made blocks I hadn’t tried before – all with blue scraps.  The blocks were of various sizes and I used borders to make them all the same size and maroon sashing to put them together.

The backing/batting is a pretty blue fleece.

The quilt measures 48 x 60 inches and took on a nautical look without my intending it to be that way.  I think it will be a nice 60th birthday gift for my son and his dogs. 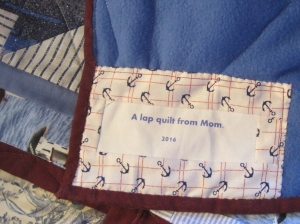 This is block 9 in Susan’s Stars and Pinwheels QAL, called Arizona 2 with Flying Geese.

I’m continuing on this QAL to make a different small project with the featured block each month.  I reduced the size of the block to 7 inches to make it a good size for my mini quilt rack.

I used scraps from a lace curtain over fabric to make the setting triangles and found some pretty braid to embellish. 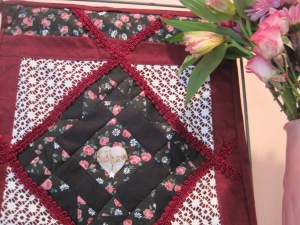 With Valentine’s Day approaching, I added a vintage mother-of-pearl pin to the center.

This was an easy block and turned out so pretty. 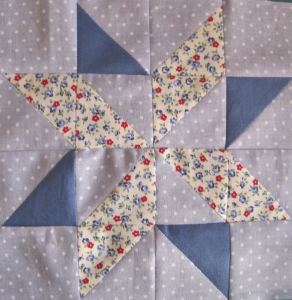 This is block 8 in Susan’s Stars and Pinwheels QAL called Christmas Pinwheel Star.

Since I’m making a small project each month with the featured block, I decided to use this block in a cover for a lumbar cushion.  Because the cushion is curved, it’s difficult to cover and I used a lined 30 inch x 10-½ inch panel with Velcro on either end to fit over the center of the cushion.

I reduced the size of the pattern to 8-½ inches unfinished (2.5 and 3.5 inch squares) and added borders plus some longer pieces for the cover to join in the back. 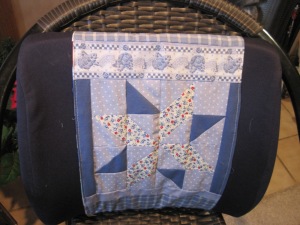 I thought this was a very pretty block and it was easy to put together with half-square triangles. 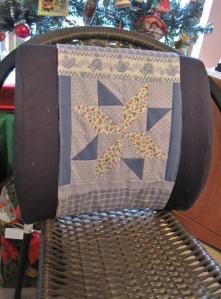 One of my birthday gifts in September was a copy of The Farmer’s Wife 1930s Sampler Quilt book plus 20 fat quarters of 1930s reproduction fabric.  I had fun picking out blocks that I would like to make at random and using a couple of the pretty fat quarters along with some white fabric to make 6-½ inch unfinished blocks.  This is the first one I tried, “Addie”…. 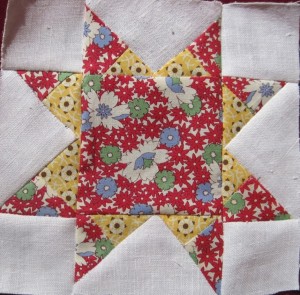 I did all of the piecing by machine and used the CD provided with the book to print out the patterns.  I like to work with small blocks, so the 6-inch finished size was good for me.

The book includes assembly diagrams for piecing the blocks and template cutting instructions with full color pictures.  It also includes 99 letters from the 1930s depression era to the magazine, “Farmer’s Wife” with stories of how they were surviving and enjoying life in the middle of the depression.  My daughter found my book on eBay about $10 cheaper than the advertised price.

I used 22 different blocks from the book (plus two repeats) to make Christmas lap quilts for my two daughters (36 x 48 inches).  I placed the blocks on point and added white fabric to complete the quilt tops.

The borders were made from scraps of the fabric in each quilt.

I pieced together scraps to make the backing for the older daughter who likes batting and a cotton backing.

The younger daughter prefers fleece as batting/backing and I chose a pretty pink fleece with hearts for her quilt.  For each quilt, I made a duffel bag of Christmas fabric scraps to use as a gift bag and then later to use as a storage bag.

I love the blocks because of my own memories of the 1930s and because they were made from treasured gifts.

Now, that Christmas is over, I can share some of my holiday quilting projects.  I have a large stash of orphan blocks, saved over the years from various projects or sometimes made as a single, difficult block that I would not want to use for a big quilt.  I decided to put some of them together as lap quilts for my son in St. Louis, his wife, two daughters and their dog.

In each case the quilts were 36×48 inches (except for the one for the dog) since that’s about as big as I can handle on a domestic sewing machine any more.  Also, the quilts were all backed with fleece and included  hand-embroidered labels.  My son’s quilt was made up of black/white blocks, which included several Judy Martin blocks, an Eleanor Burns block and a 70s style appliqued turkey.

I used sashing and some lively polka-dot fabric as borders to complete the project.

My daughter-in-law’s quilt had a large medallion block in the center that was made as part of Jacquelynne Steves’ Sew Sweet Simplicity quilt-along. 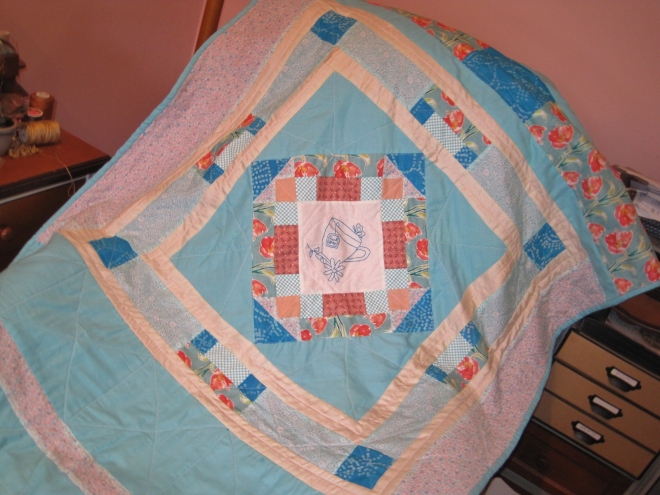 The older granddaughter’s quilt was made using a block I saw on the internet.  I added an embroidered panel at the top.

The younger granddaughter’s quilt centered around a block I found online plus three hand-embroidered panels at the top.

The dog’s quilt was made using blocks from a Barbara Brackman Civil War quilt-along and one block I made for a swap about 12 years ago. 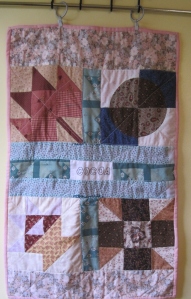 The family sent me a picture of Cocoa with her quilt.  I’ve never met Cocoa and think the next time I’ll need to add a few more blocks for a bigger quilt.

This is block 7 in Susan’s stars and pinwheels quilt-along, called Expanding Star.

I’m using these blocks-of-the-month to make a different project each month rather than saving them for a quilt.  This month, I reduced the block size to 8 inches (unfinished) and made three of them to incorporate in a table mat for a special table in my living room.  I fussy-cut three designs from a Christmas panel and added some festive fabric to make the red diamonds.

I bought the vintage sewing table in an antique store several years ago and it gets constant use as a table for sewing, eating, watching TV, working with photographs, writing notes and cards, and is the regular Sunday dinner table for my reclusive 16-year-old grandson.  I keep a mat on it at all times

This is an easy block which has a good secondary design. 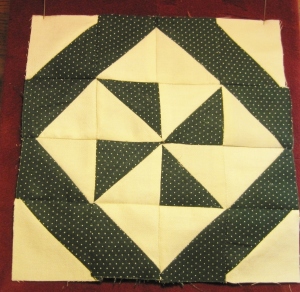 This is block 6 in Susan’s stars and pinwheels quilt-along, called Pinwheel 7.  Colors are distorted in the picture – fabrics are white and dark green polka dot.

I’m using the blocks in this series to make a different project each month rather than saving them for a big quilt.  This month, I decided to replace a 30-year-old mixer cover for my 30-year-old Kitchen Aid mixer.

My daughter had brought the cover back from a trip to Ireland and it’s still in good shape, but it’s time for a different look for that part of the kitchen counter.

I used the old cover as a three-part pattern (center and two sides).  I reduced the block size to 7 inches finished and used four of them plus two end pieces to make the center of the cover. 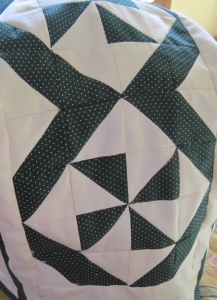 I found two Dutch embroidered panels in my stack of hand-embroidery and used one for each side. 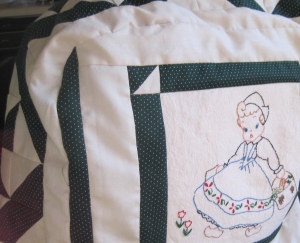 All I needed was a lining and some binding around the bottom to complete a new, very different cover for the old Kitchen Aid.

The block patterns began in May and ended in October with suggestions on setting and borders.  I intended from the first day to make a cover for a large storage hassock I keep in my sewing room.  There would be one panel for the top and four for the sides, adding corner triangles and sashing.

I thought the blocks were very pretty  ….. 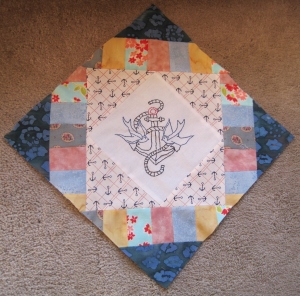 Unfortunately, the end product was not what I wanted.  The cover doesn’t fit as well as I hoped and I’m not sure about the triangle fabric I used.  It has the beach and shoreline look I wanted but doesn’t set off the blocks very well.

I’ll keep the cover for now, but the piece would be easy to take apart and I’ll be looking for ideas to use these nice panels in a better way.

There were five blocks in the series, each with a pattern to embroider or applique for the center.  I have a large hassock with a lid which I’m going to cover, using five blocks – one for the top of the lid and four for the sides.

My version of Block 5 is shown in the top picture.  This will be one of the sides of the hassock cover, using a vintage embroidery pattern for the center.

I made all of my blocks with a beach or nautical theme.

Jacquelynne has completed the series with suggestions for setting and borders, but since I will not be making a wall hanging, I will work out how I want to place these blocks using one top panel and four side panels to make the hassock cover.  More on that in a week or two.

Jacquelynne always offers interesting blocks that are simple and easy to make but very pretty.  I’ve enjoyed this quilt-along.

This is block 5 in Susan’s stars and pinwheels quilt-along, called Split Star.  I’m using the blocks in this series to make a different project each month rather than saving them for a big quilt.  This month, I wanted to make a cover for my piano bench which accompanies my 1960s era piano. 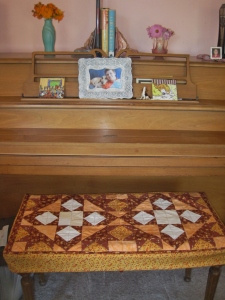 I had the chance to choose some pretty fall-themed fat quarters on a recent visit to Amish Country to use in this project.  There are several ways to arrange the blocks and I chose this design.

The Split Star pattern is pretty, easy to sew and easy to reduce in size.  I think it made a very nice bench cover.