In 1938, my parents, my little sister, Shirley, and I were living in a rented flat on Elm Street in downtown Cincinnati.  The building is still standing and I posed for a picture back in 2002.

My father worked for the WPA as a timekeeper and we were finally coming out of the depths of the depression.  The living room of the flat had huge sliding wooden doors and on Christmas Eve, my sister and I (3-1/2 years and 6 years) sat with our eyes glued on that door and imagining what Santa might be bringing us.  As we sat huddled together in the kitchen, I heard a tinkling of sleigh bells.  My father argued a little bit with me, but I swore I heard sleigh bells so Santa must have arrived.  Finally, he pulled open the doors and it was like walking into the toy department of a big store (like the Fair Store or Rollman’s or Shillito’s).  My parents didn’t wrap any of the gifts but rather had them set up all around the room, ready for fun.  The first thing Shirley and I spied were beautiful baby dolls for each of us in little metal strollers.  The dolls were dressed identically in white dresses and white flannel coats with bonnets.  We were able to tell them apart because my doll had dark brown eyes (as I had) and Shirley’s doll had her shade of blue eyes.  They were the most beautiful dolls we had ever seen.

I named my doll Mary Dorothy after two of my classmates at old Raschig School – Mary Louise McFarland and Dorothy Sutton.  Shirley just called her doll Baby until later on when we had a new cousin named Carol Ann and then the doll became Carol Ann, too.

Twenty-five years passed and Shirley asked for Mary Dorothy to add to her doll collection.  I knew in Shirley’s care, Mary Dorothy would be dressed impeccably and would be in elite company in my sister‘s collection.  She stayed there for over 40 years until 2004 when she was given to my youngest granddaughter, but I had to promise to sew the clothes to dress her as she looked on that first Christmas Eve.

Before Shirley passed away in 2010, she gave my granddaughter her doll, Carol Ann, as well as the rest of the collection.

My vintage doll table was set for an Easter breakfast this morning with a new crocheted table cloth, a tiny basket with eggs, a new tea set and miniature Jadite hen and rooster.  Of course, there was also a new crocheted Easter bonnet for the hostess. 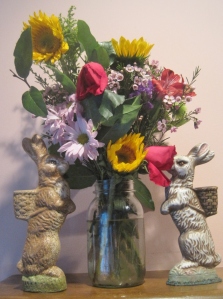 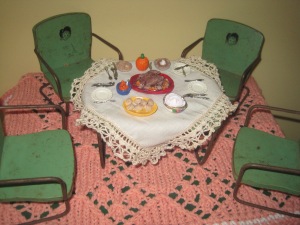 My doll table magically held a full Thanksgiving dinner this morning, thanks to my daughter’s skill with clay.  There are all of our favorites – a big turkey, mashed potatoes, sweet potatoes, yeast rolls, pumpkin pie and apple pie.  It would save me a lot of time if the meal could appear by magic today on my dining room table, but then I wouldn’t have the fun of getting everything together for my family once again (the 60th Thanksgiving dinner I’ve cooked).

When I came out to the kitchen this morning, I found that my vintage doll table was set for a Halloween party.  There was a pumpkin and skull, a plateful of candy apples, cookies with bat and jack o’lantern designs and mugs for cider. 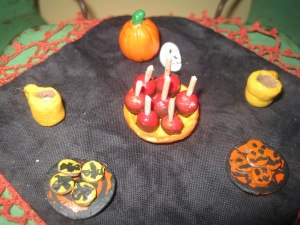 There was even a pretty black luncheon cloth with an orange crocheted edging. 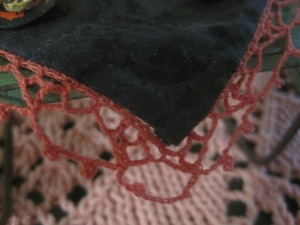 My oldest daughter who lives with me had fashioned these tiny dishes out of clay (the plate of apples is about the size of a quarter) and made the little luncheon cloth.  All we need now are some miniature trick or treaters. 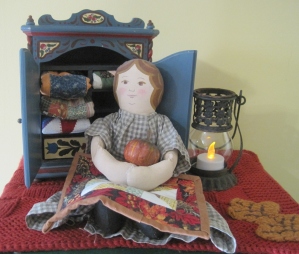 Heidi is a fellow Ohioan who lives in Holland.  She has a blog where she shares some of the greatest decorating ideas.  I loved this post where she took a miniature armoire, refinished it and used it for storing her doll quilts.

I don’t have a small armoire and I’ve only made a couple of miniature quilts, but I did have a little cabinet (8 inches tall x 7 inches wide)  that was hand painted by my oldest daughter and given to me several years ago to use as a jewelry chest.

My daughter also gave me a handmade doll which sits in a twig chair and holds seasonal items.  Her name is Emily (the name of two of my great-grandmothers) and the dress she is wearing is one that my mother had made in 1942 from an old school dress of mine.

I have several 5-6 inch blocks that I’ve made through the years to place on Emily’s lap.  So, when I put the two elements together, I had a small version of Heidi’s charming armoire. 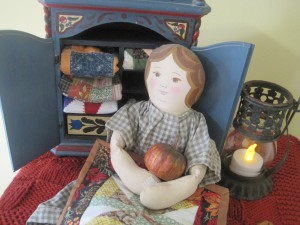 Each week, I look forward to Heidi’s “Make do and mend Mondays” to see what other good ideas she has.