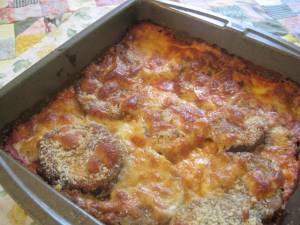 One of my favorite dishes is Eggplant Parmesan – but only if the eggplant isn’t mushy.  I discovered this food back in the late 1970s at a Cincinnati restaurant which is no longer in business.  The eggplant was just right.

I first used this recipe back in 1980 from a Redbook cookbook, trying to duplicate the old restaurant specialty.  I liked it best in the mid-1980s when we grew our own eggplant – a Japanese version that was small, had few seeds and had a good consistency when cooked.  I happened to see a Japanese eggplant at the market and thought I would give it a try.  It was very close to my old Italian restaurant favorite. 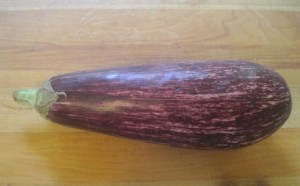 This eggplant was about 8″ long and about 2″ thick at the widest part.  It had a very thin skin so it wasn’t necessary to peel it.

Remove ends of eggplant and cut into 1/2″ slices. 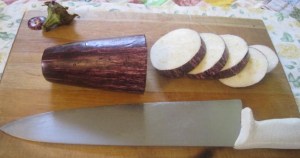 Get out three small bowls and in one, place the undiluted evaporated milk; in the second bowl, the flour; and in the third bowl, the Italian bread crumbs.  Dip each eggplant slice in the milk, then in the flour, then back in the milk and in the crumbs, coating both sides of the eggplant.  Repeat with remaining pieces of eggplant.

In a large skillet, heat 1/4 cup olive oil and place the coated eggplant slices in a single layer in the pan.  Cook until slices are browned on both sides, adding a little more oil if necessary. 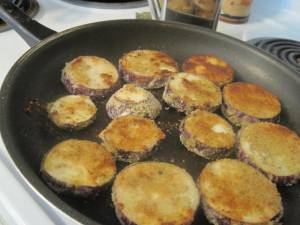 Remove from heat and place slices on a piece of paper towel to drain.

Place the spaghetti/pasta sauce in a 9″ baking pan. Arrange eggplant on top of the sauce.  Sprinkle with mozzarella and parmesan cheese. Drizzle with melted butter.

Bake uncovered for 30 minutes @ 350 degrees F. Cool on rack for 10 minutes before cutting. 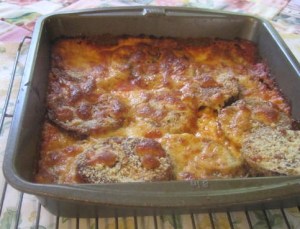 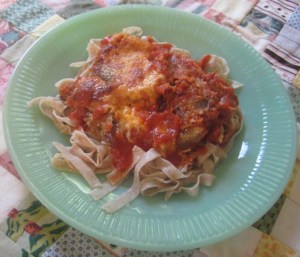 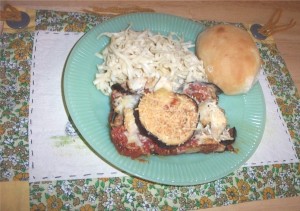 This recipe is adapted from one I found on Razzle Dazzle Recipes about four years ago.  I’ve made it many times for my daughters for lunch.

Slice eggplant in 1/4″ slices.  Place in a colander, sprinkle with salt, place a plate on top and weigh down with something heavy.  Let stand for an hour.

Turn broiler off and heat oven to 425 degrees F

Oil or spray an 8″ baking pan

While dish is baking, cook the pasta in boiling salted water until al dente according to package directions.

Cut the Chicken and Eggplant Parmesan into four sections and serve alongside cooked pasta.

This is a very tasty, not too-heavy lunch. 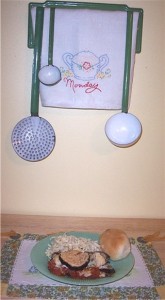