On July 13, 2012, my two daughters surprised me with a big box of wrapped gifts, informing me it was exactly 80 days until my 80th birthday and I would be able to unwrap one gift a day.  The gift items would commemorate a year in my life in some way.  This is what I received this week: 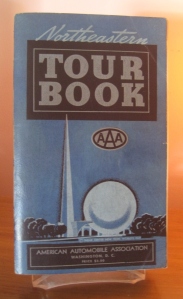 1940 – A 1940s AAA tour book for the eastern seaboard which included my home state of Ohio.  It’s so interesting to compare the listings to what we have today.  Most hotel restaurants at that time offered breakfast for 50 cents, lunch for 75 cents and dinner for $1.00.  For chicken or steak dinners, the cost was $1.25.  Of course, we were still fighting our way out of the depression and wages were low. 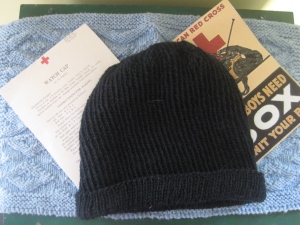 1941 – My youngest daughter knitted a Navy watch cap made from a 1941 Red Cross pattern along with a flyer saying that “the boys need sox – knit your best”.  I’ll wear this cap to take the dog for walks on cold winter days.  Actually, my husband had a cap just like this when he was in the Navy in 1952. 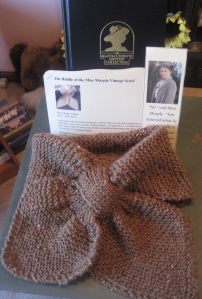 1942 – A copy of Agatha Christie’s The Body in the Library, published in 1942 along with a scarf knitted by my daughter.  This scarf is identical to one that Miss Marple wore on a TV series, pictured on a bookmark my daughter made.  The yarn is called “Chipmunk Tweed”, just right for a Miss Marple scarf. 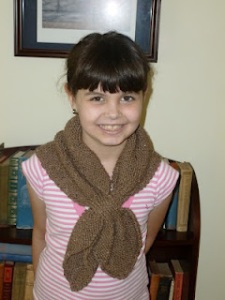 My granddaughter is a perfect model for the scarf. 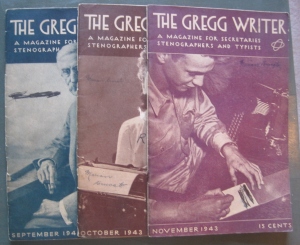 1943 – Three copies of the 1943 magazine, The  Gregg Writer.  This is the perfect gift for me.  I started taking shorthand classes in 1947, used it throughout my long career and still use it today as a time-saving way of keeping notes. 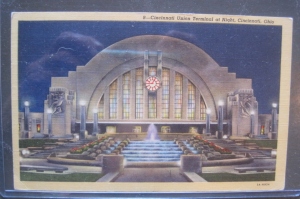 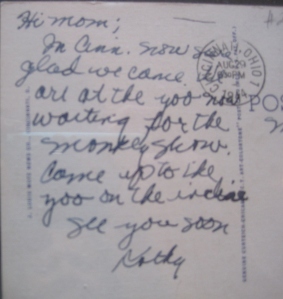 Message on the back:  “Hi Mom – In Cinn. now sure glad we came.  We are at the zoo waiting for the monkey show.  Came up to the zoo on the incline.  See you soon.”  Two more famous Cincinnati landmarks are mentioned – the Zoo and the incline with a cable car that brought passengers up and  down the hill between the Cincinnati valley and the Zoo.   One year, my mother brought my little sister and me back home from a school outing at the Zoo by riding on the incline. 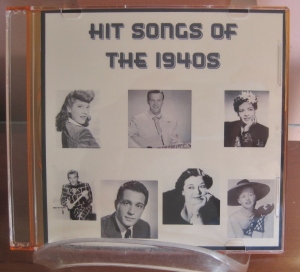 1945 – My youngest daughter made up a CD of 25 hits from the 1940s, including some of my favorite artists – Perry Como, Dinah Shore and, of course, Spike Jones. 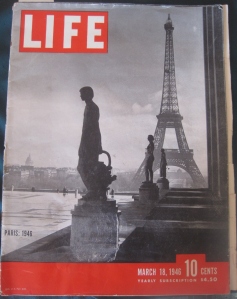 1946 – A March 18, 1946 copy of Life Magazine.  There are all of the usual great pictures and ads, but of special interest to me is an article about one of my favorite authors, Betty MacDonald.  Her book, The Egg and I was a best seller in 1946. 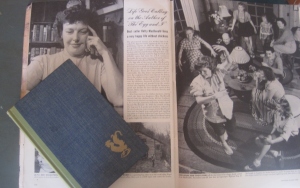 Another wonderful week of gifts which show how well my daughters know me and know what I like.

Note:  My youngest daughter has a post on her blog with information and links for the gifts she has knitted so far.

All of my posts on this wonderful celebration are listed in Family – My 80th Birthday in my index on the right hand side of the page.

On July 13, 2012, my two daughters surprised me with a big box of wrapped gifts, informing me it was exactly 80 days until my 80th birthday and I would be able to unwrap one gift a day.  The gift items would commemorate a year in my life in some way.  Here is what I received for the first year – 1932. 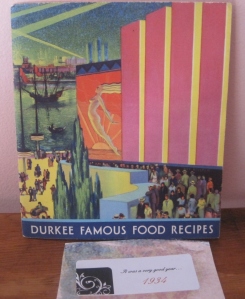 1933 – Recipe and souvenir folder from the Chicago World’s Fair for Durkee products.  I have a fairly large collection of product recipe pamphlets, but I didn’t have this one. 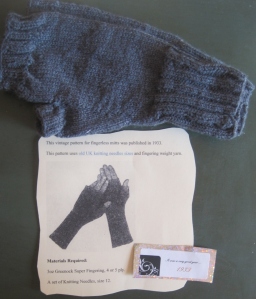 1934 – My youngest daughter knitted a pair of fingerless gloves from a 1934 pattern, overcoming some differences in needles and yarn.  These are so unbelievably soft.  They will definitely be worn next winter. 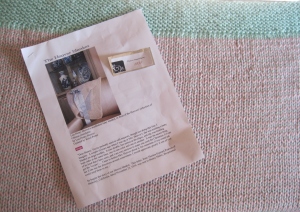 1935 – My youngest daughter knitted a “Hoover Blanket” from a 1935 pattern attributed to President Hoover’s wife.  The center of this baby-size blanket is double knit, done by knitting the front and back simultaneously.  The vintage green is my favorite.  It will make such a nice lap blanket. 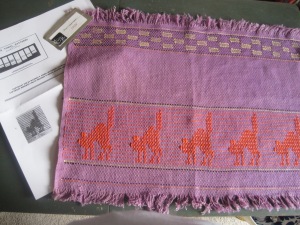 1936 – My oldest daughter embroidered a Halloween huck towel from a 1936 pattern.  This will be a nice stand cover when I get out my Halloween decorations. 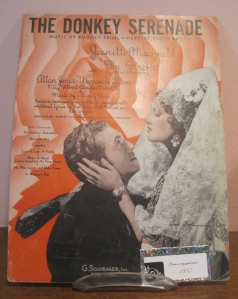 1937 – Sheet music from 1937 for The Donkey Serenade.  In the 1930s-40s, my family went to the picture show often, but always the ones my father wanted to see – westerns, historical dramas, war movies.  The only musicals we saw were the Road movies with Bing Crosby, Bob Hope and Dorothy Lamour.  I don’t know how we wound up in a theater watching The Firefly with Alan Jones and Jeanette MacDonald, but I remember after watching Alan Jones sing his Donkey Serenade, my father got up abruptly and started toward the exit.  My mother, my little sister and I followed along and I said in a loud voice, “That was lousy with a capital L”.  At that point, my embarrassed mother gave me a stage whispered “HUSH” and a sharp nudge up the aisle.  My daughters have always enjoyed this story, which prompted the sheet music gift.  I never did care much for Alan Jones, but in later years, I enjoyed hearing and seeing his very cool son, Jack Jones. 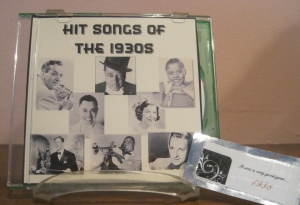 1938 – My youngest daughter recorded 26 songs from the 1930s era onto a CD for me.  The first track was (what else?) The Donkey Serenade.  But there were a lot of songs I really liked – Lazy Bones, Boo Hoo, Happy Days are Here Again, Minnie the Moocher, Frankie and Johnny, You’re in the Money, Pennies from Heaven, etc.  There were only a couple of tracks that I didn’t remember, mostly big band numbers which I was too young to appreciate at the time.  I listen to these songs and I’m transported back to a flat on Elm Street in downtown Cincinnati.  A small radio was kept on the mantel and I can see my little sister and me listening intently to the latest hits.  I remember hearing Bei Mir Bist Du Schoen and thinking they were saying, “My Dear Mr. Shane”.  I’m not sure even my mother knew what they were saying on that recording. 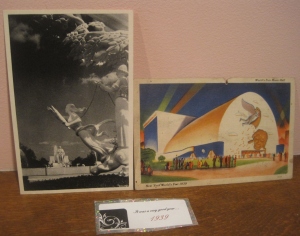 1939 –Two postcards from the 1939 New York World’s Fair.  The card on the left shows a view of the statue of George Washington by James Earle Fraser, from the Sun Dial, Time and the Fates of Man by Paul Manship.

The card on the right shows the Hall of Music.

I love vintage postcards and these will be wonderful additions to my collection.

Wonder what all those packages for next week contain?

Deanna at Wedding Dress Blue posted five days of small projects last week, along with links to tutorials.  I made two of the projects and was very pleased with them.

These card holders were easy and fast to make.  I like to have something handmade to hold gift cards and these were perfect.  I chose to use snaps as closures and I thought they turned out very cute. 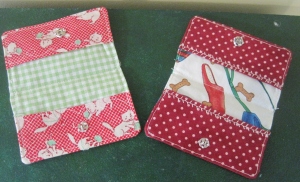 It was fun to check in each day to see what Deanna had for us.  Here are the other three projects she posted:

My 79th birthday was such a lovely day – lunch with my two daughters, phone calls from my two sons and my best friend, gifts at my youngest daughter’s house with her family plus her renowned white cake with caramel frosting and watching one of my favorite movies, Breaking Away.

Everything worked out so well this year – the gifts were simply overwhelming.  My youngest daughter saved all of her gifts for the big day:  flowers, her hand-knitted gifts of placemats, dishcloths, a spectacular long scarf in variegated yarn, and an I-Pod Nano MP-3 player with all of my favorite songs and albums already downloaded for my listening pleasure. 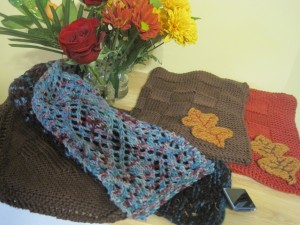 Twelve-year-old grandson Jellyfish picked out a wonderful Scottie cookie jar and paid for it out of his own allowance. Eight-year-old granddaughter Dolphin drew one of her special pictures and cut/folded a 3-dimensional dog, probably a Scottie in answer to her brother’s cookie jar. 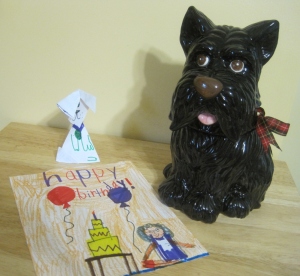 My youngest son and his family in St. Louis sent a box full of beautiful dish towels and pot holders – I love anything for the kitchen. 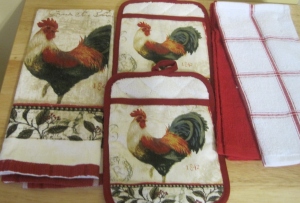 In addition to her daily countdown gifts, my oldest daughter gave me a vintage Jadeite bowl, candle holder, thermometer and glasses; a Scottie covered dish; a crocheted doily in fall colors; and a big stack of fabric samples. 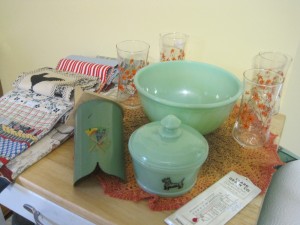 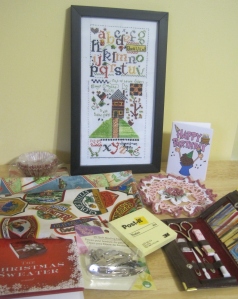 I came home at 10 PM to another piece of cake and then spent three hours trying to get to sleep – it’s hard to let go of a perfect day. 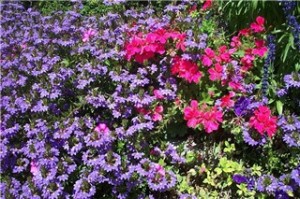 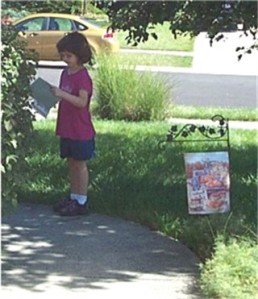 …and ten-year-old Jellyfish (currently in training as a “Ghostbuster”).

Jellyfish had taken my picture last week and printed out a frame and mounted it plus he made a great bookmark.

Dolphin had promised me a hundred times on Saturday that she would make my favorite Scottie, which she did, along with a colored picture of a grandma and granddaughter baking.  She even made her own wrapping paper and a paper bow. 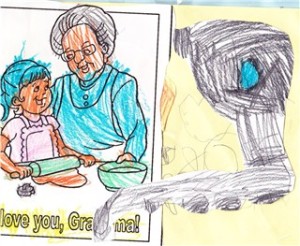 Their mother has always had a mug made up with a picture on it for Grandparents’ Day.  This year, number 11 will join the others on my special shelf. 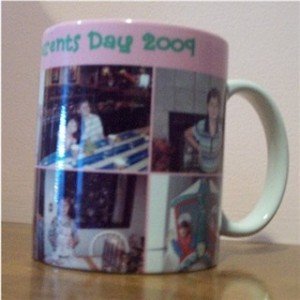 I fixed a roast beef dinner for the family and for dessert tried out one I had seen on All Recipes, Chocolate Chip Cheese Ball.  I called it a “girly” dessert but my son-in-law and grandson managed to enjoy some of it, maybe not as much as my two daughters and I did.

In a medium bowl, beat together the softened cream cheese and softened butter until smooth.  Mix in the confectioners’ sugar and vanilla.  Stir in the chocolate chips.  Cover and chill in the refrigerator overnight.

The next day, shape the chilled cream cheese mixture into three balls.  Wrap each ball in plastic and chill in the refrigerator for at least one hour.

Before serving, roll one ball in toffee bits, one in pecans and keep one with just the chocolate chips.

The comments on All Recipes indicated some people had problems getting the mixture to form a ball.  Other people suggested storing the beaten cheese mixture in a metal bowl and refrigerating overnight.  They also stressed using only full-fat butter and cream cheese.  I followed these suggestions and had no problems forming the balls.

It was a fun dessert and a nice ending to our Grandparents’ Day dinner. 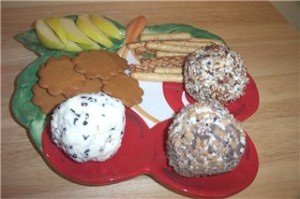