My older daughter who lives with me will be celebrating her 61st birthday today and I’m preparing her favorite birthday dinner – Mini Beef Wellingtons with mushroom sauce, mashed potatoes, and asparagus with Hollandaise sauce.  I thought it might be a good opportunity to re-post a blog from five years ago.  We’re having this exact family dinner today, including the cake.  Everybody enjoys it. 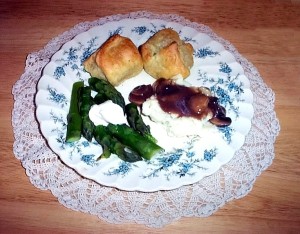 My oldest daughter’s favorite birthday meal is Mini Beef Wellingtons with mashed potatoes, mushroom sauce and asparagus with Hollandaise.  It’s not a difficult meal to prepare, but time-consuming.  I make the pate and mushroom sauce the day before and cook the beef early in the day of the dinner to allow time for it to cool for easier handling.  I used to buy a beef tenderloin but found it easier to simply buy the filet mignons wrapped in bacon that my store handles.

Allowing time for the meat to cool well enough to handle, place the filet mignons in a baking pan, sprinkle with salt and pepper.

Cover and bake @ 300 degrees F for approximately one hour, depending on how  you like your meat (my family likes it well done, especially in this dish).  Allow to cool.  My filet mignon comes wrapped in a slice of bacon.  Remove the bacon.  Cut meat into 18 small portions.

Cut the 2 sheets of puff pastry into 9 sections each.  Place one section on a floured board and roll thin (like pie crust).  Place one portion of meat in the center of the pastry.  Top with about a teaspoon of Chicken Liver Pate (recipe below), bring up edges of pastry to cover the meat and  seal.  Place on an ungreased baking sheet.  Repeat with remaining sections of pastry and beef/pate.  Brush the tops of the pastry with milk and bake @ 350 degrees F for approximately 30 minutes. 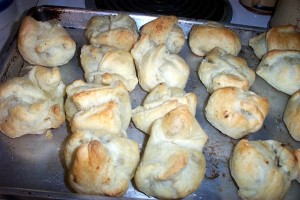 Rinse and drain chicken livers and cook in broth over moderately low heat for about 15 minutes until no pink shows in the livers.  Drain and set aside.

Cook bacon for 5-7 minutes until crisp and golden brown.  Remove bacon and in the remaining fat cook onions for about 7 minutes until soft but not brown.

Refrigerate until ready to use.  Makes about one-half cup of pate.

Adapted from Redbook Cookbook.  First made to use with Beef Wellington in 1989.

In a small skillet, saute the mushrooms in butter until they are just beginning to brown.  Set aside.

In a small bowl whisk together the flour and 1/2 cup of beef broth.  Set aside.

In a medium saucepan, place remaining one cup of beef broth, wine.  When mixture is hot, whisk in the flour/broth mixture.  Bring to a boil and let cook for 2 minutes, whisking.  Stir in mushrooms, salt and pepper.

Makes about 2 cups of sauce to pour over the Wellingtons and/or potatoes.

Asparagus is good with this meal and we like this Mock Hollandaise Sauce.

For dessert, a big frosted cake from our favorite Cincinnati bakery,Servatii’s. 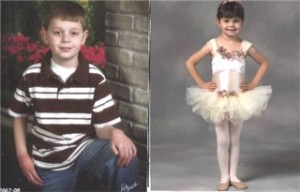 My two youngest grandchildren, known here as Jellyfish (age 9) and Dolphin (age 5) have always been encouraged by their mother to remember me on Grandparents’ Day.  Yesterday I received a mug with their pictures to join 9 others in my collection. 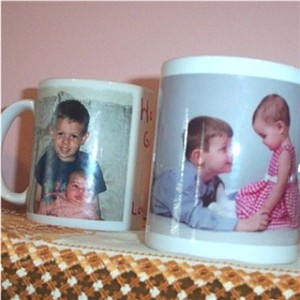 As soon as they were able to draw, write or color, they have also given me something they made themselves.  This year, Jellyfish spent many hours printing and coloring detailed information sheets about dinosaurs.

Dolphin also drew a dinosaur and made a special card.

Both of them made up a booklet, “My Grandmother”, with lines to fill in with information on where I live, what I like and what we like to do together.  The page about my real name turned out fine with Jellyfish’s “Lillian” but a little odd with Dolphin’s “Owl”. 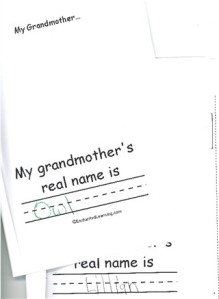 I like to have Sunday dinner at home, so as usual I fixed dinner for everybody.  Along with roast beef, mashed potatoes,carrots and homemade yeast rolls,  I steamed some asparaus and served it with this delicious Mock Hollandaise Sauce which is much friendlier fat and cholesterol-wise.

Blend together by hand or in a food processor.  To warm, heat in microwave oven for about 30-45 seconds.

Yield:  One cup of sauce

I have a note in my recipe binder:  “From Southern Sideboards cookbook.  Made for Mother’s Day 1994 to serve with our homegrown asparagus.  Very rich and smooth – easy to heat up.”