Since my 86 years have started to catch up with me, I don’t cook as often, particularly experimenting with new recipes that I can share. I do still cook the family holiday meals, though, and every Sunday fix lunch for my two daughters which features a favorite recipe and is followed by 3 hours of various kinds of needlework and chatting. For these lunches, I always make something they especially like from my blogs of over 10 years and I thought it might be fun to share my Sunday desserts each week.

On the two Sundays before Thanksgiving, I try to make something that’s the exact opposite of food we might have on that holiday. This week I went with a sort of German theme with a smaller version of German Chocolate cake as dessert and for an entrée, Reuben sandwiches.

My younger daughter is the only one who loves coconut, so I don’t need a big cake. I adapted my recipe to make this smaller version which is plenty for a lunch serving for the three of us with some left over for my daughter to take home. From my 2012 post:

**To substitute for buttermilk, place 1 Tblsp. white vinegar in a measuring cup and add enough milk to reach one cup (8 oz.). Let stand 5 minutes before using.

In a small microwave-safe bowl, microwave chocolate and water on high for 1-½ to 2 minutes, stirring after 1 minute, until chocolate is almost melted. Remove from microwave and continue stirring until the chocolate is completely melted.

Mix flour, baking soda and salt in a separate bowl.

Bake @ 350 degrees F for approximately 30 minutes or until a toothpick inserted in the center of a cake comes out clean. Immediately loosen the sides of the cakes and allow to cool in pans for 15 minutes.

Spread 1/3 of the Coconut Pecan Filling/Frosting on top of one layer of the cooled cakes, top with a second layer and spread its top with 1/3 of the filling/frosting. Repeat with the final layer and 1/3 of frosting.

This is a wonderfully soft, delicious cake but I had a little of trouble handling the layers even in this smaller size. The cake isn’t picture-perfect-looking, but it sure tastes great.

Hershey’s makes delicious salted caramel chips which are available in our area only during the Christmas season. I buy three or four bags and squirrel them away for use during the year. This is a blonde brownie that I have made in various ways,  made even more delicious with these chips.  Of course, any kind of chips would be fine – dark or milk chocolate, butterscotch, peanut butter, etc., but the salted caramel version gives a special flavor to these easy-to-make bars.

In a large bowl, whisk together the eggs, sugars, oil and vanilla. Whisk in the baking powder and salt. Stir in the flour, chips and pecans just until blended.

Spread in prepared pan. Dampening your fingertips will help spread the batter in the pan. Bake for 30 minutes at 350 degrees F until top is light-golden brown – don’t overbake.

Let cool in pan for 5 minutes, then remove by lifting parchment paper and cool on wire rack.

Tip: Before cutting, remove parchment paper and place it under the rack for easy cleanup of crumbs. 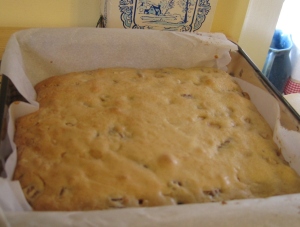 Tuesday was a bitterly cold day here in southwest Ohio, the second of two heavy snowfalls imminent, and I was craving macaroni and cheese.  I normally make a reduced-fat version (https://lillianscupboard.wordpress.com/2008/02/29/shannons-macaroni-and-cheese/) but on a day like this, I wanted all of the cheese I could get. I came up with this version which my daughters and I really enjoyed.

In the bottom of a microwave-safe baking dish, place the cream cheese and microwave for 45 seconds, until cheese is very soft. Stir in the grated cheddar, milk, salt, dry mustard and black pepper.

The macaroni was served with chicken breast which had been sprinkled with olive oil and herbs, and baked a covered pan at the same time as the macaroni casserole. We also had some steamed broccoli and carrots. Delicious snowy-day meal. 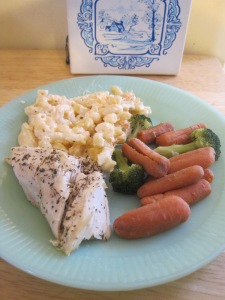 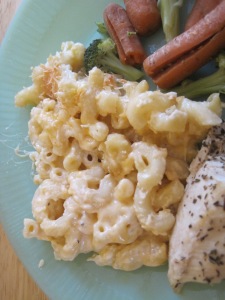 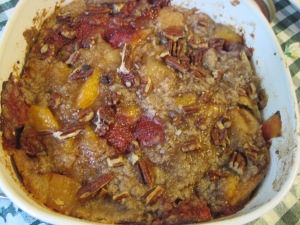 For Sunday dinner, I had intended to bake an old favorite, Peach Lasagne, using leftover Italian bread and some beautiful peaches from the farm market. Unfortunately, the peaches I had bought most recently weren’t ripe enough and the three peaches leftover from the previous week didn’t equal the four cups I needed for the recipe. I decided to add some leftover strawberries and drained, canned pineapple tidbits. I also substituted toasted pecans for the almonds in my original recipe and the dessert was delicious. My daughters loved it.

This is the original recipe: https://lillianscupboard.wordpress.com/2008/07/06/peach-lasagne/

Cut fruit into bite-sized pieces, add granulated sugar, mix and set aside.
Spread butter on both sides of 8 slices of bread. Place slices in a large skillet over medium heat and brown on each side.

Line the bottom of a 9 inch baking dish with half of the browned buttered slices – just cover the bottom without overlapping. OK to break the bread into smaller pieces to fit them in. Sprinkle ¾ Tblp. sugar over the slices. Spoon half of fruit mixture on top of bread slices, spreading to cover.

Repeat with another layer of bread slices sprinkled with sugar and the remaining half of the fruit mixture.

Crumb Topping: Mix together the flour, brown sugar, granulated sugar, cinnamon, and salt and cut in butter. Sprinkle the topping over the last fruit layer and top with chopped pecans. 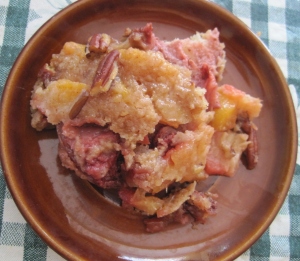 I started out intending to make a completely different orzo salad but was lacking some of the ingredients. I changed to what I had on hand and made a very delicious and filling lunch or supper salad.

Place dressing ingredients in a one-pint jar with a tight-fitting lid.  Shake vigorously to mix ingredients and pour over chicken/orzo mixture. Cover and refrigerate at least one hour before serving. Remove from refrigerator about 15 minutes before serving and stir.

Each summer I look forward to the wonderful, flavorful blueberries grown by a local farm/market – Blooms and Berries (Loveland, Ohio). I was looking for a sauce to be used on ice cream that would not detract from the natural flavor of these berries and came up with this very simple recipe which everyone loves. I make the sauce as I’m finishing cooking the meal, turn it off and allow it to set until we’re ready for dessert. That makes it just the right temperature for serving.

Place berries, sugar, water, nutmeg and vanilla in a medium saucepan and heat over medium heat, stirring occasionally, until mixture comes to a boil – approximately 10 minutes. Remove from heat and let stand for a half-hour or so to cool a bit. Spoon over vanilla ice cream. 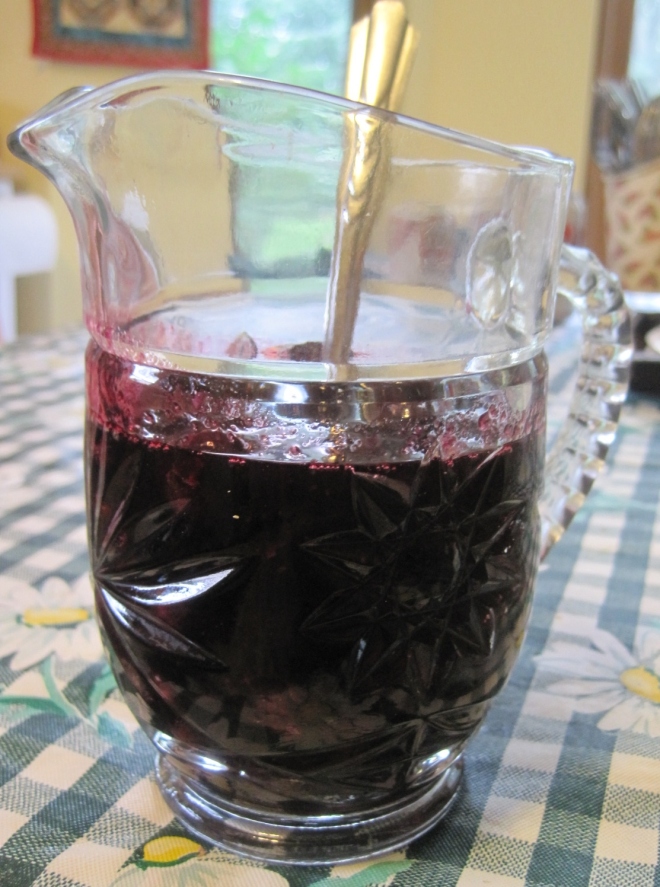 Blooms and Berries just announced that their U-Pick session for blueberries begins tomorrow.  My daughter will have to get down there early to pick berries and I’ll be sure we gave enough ice cream on hand.  Summer is here!

This is an adaptation of a recipe I found in 2015 on a wonderful site called Natasha’s Palace.  It’s worth a visit there to see all of the great and unusual recipes she has.  The original recipe is here:

My daughters and I love this dish, especially if I can use some flavorful Honey Baked Ham leftovers.

In a saute pan, heat olive oil over medium heat.  Add the onion slices, sprinkle with salt/pepper and cook for 3-4 minutes until onions are translucent but not brown.

Add garlic and cook for another 1-2 minutes.

Add pear slices and ham and cook until heated.  Stir in oregano and salt/pepper to taste.  Stir in butter and drained pasta.  Add goat cheese in small lumps and stir gently until cheese has melted. 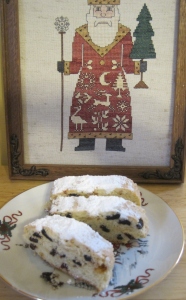 I really love this version of stollen which is easy and fairly quick to make.  The ricotta gives the dough an interesting texture and the bits of dried fruit are delicious.  Even with a heavy coating of powdered sugar, this is not overly sweet.  Lovely with hot coffee or tea. 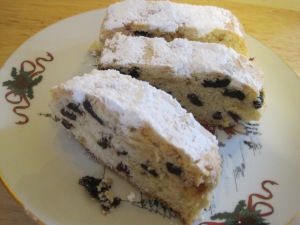 Preheat oven to 325 degrees F
Lightly grease a baking sheet or line it with parchment.

In a mixing bowl, whisk together the flour, sugar, baking powder and salt.

Blend the butter cubes into the flour mixture to form uneven crumbs.

In a separate bowl, mix together the cheese, egg, vanilla and flavorings.

Toss the fruit and almonds with the flour mixture until evenly distributed.  Than combine the wet and dry ingredients, mixing until most of the flour is moistened.

Turn the dough out onto a lightly floured work surface and knead it two or three times until it holds together.  Divide dough in half.

Form each half of dough into a rectangle about 4 inches x 7 inches, 1-1/2 inches thick.
Place shaped stollen on the prepared baking sheet.

Bake the stollen until they’re lightly browned around the edges – about 40 minutes.  A cake tester inserted into the center of a stollen should come out clean.

Remove stollen to a rack and allow to cool.  Brush with melted butter and sprinkle heavily with powdered sugar.

This version of stollen does not keep for weeks as traditional stollen does.  Best if used within 3 days or  so. 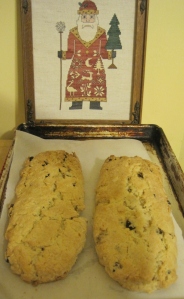 Fresh from the oven

Topped with butter and sugar

This is a tasty beef stew with vegetables, herbs, wine and a touch of brandy.  It’s easy to fix in a slow cooker and tastes so good when eaten in a warm, cozy kitchen or maybe in front of the fireplace.

In a medium skillet over medium high heat, heat 1 tsp. oil and brown chuck steak cubes on all sides – do not cook through.  Set aside

Place beef on top of vegetables.  In a medium bowl, whisk together wine, broth, brandy, tomato paste, thyme, rosemary, salt and pepper.  Pour over ingredients in slow cooker.
Cover and cook on low heat for 8 to 10 hours or on high heat for 4 to 5 hours.

Near the end of cooking time, in a small skillet, cook mushrooms in the remaining 1 tsp. of oil over medium-high heat until browned.  Stir mushrooms into beef mixture.

It’s that time of year again when we often find a few remaining Clementines and we’re tired of eating them out of hand.  This is a good way to use Clementines and enjoy a bright, orange flavored dessert.

First, to prepare the Clementines:

Wash and dry three Clementines, remove stems and place in a microwave-safe dish.  Cover Clementines with cold water, put a lid on the dish and microwave on high for approximately 10 minutes.  Clementines should be quite soft and look something like fresh, ripe apricots.  Let cool in microwave – be careful, they get very hot.

Cut the Clementines in half and process as finely as possible in a food processor or blender (remove seeds if necessary but, yes, process both rind and flesh). 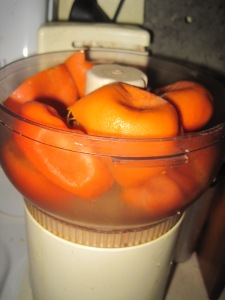 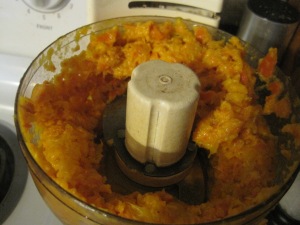 Makes about ½ cup.  Set aside.

Note:  Clementines can also be covered with water and boiled on the stove top for two hours.  Clementine puree can be frozen.

In a medium saucepan, whisk together the cornstarch, sugar, salt, egg and cold milk.  Slowly whisk in hot milk and cook over medium high heat until mixture begins to boil. Lower heat to medium and continue cooking, whisking constantly, for 2 minutes.  Remove from heat and add Clementine puree and orange juice concentrate.  Stir and allow to cool in the pan, stirring occasionally to prevent a skin from forming on top.