I like this biscotti better than any I have had in a bakery or coffee shop.  They are not too sweet, have a light orange flavor and a lot of crunchy walnuts, and are very easy to make.

Everything is mixed by hand in one bowl – no mixer – and takes just a little handling to form.  The dough is divided and plopped in big globs on a parchment-lined cookie sheet to make two piles.  Then, with water-dampened hands, the dough is formed into two rustic-looking logs.

I enjoy these very much just as a quick snack  (they travel well) or dunked in tea or coffee.

In a large bowl, whisk together the olive oil, sugar, orange extract, orange peel and 2 eggs.  Whisk in salt and baking powder, then with a spoon, stir in the flour and chopped walnuts until blended.

Bake @ 300 degrees F for 25 minutes until dough is just cooked through and lightly browned.  Remove from oven and let cool for 10 minutes.  REDUCE OVEN TEMPERATURE TO 275 DEGREES F.

Remove each loaf to a cutting board and with a serrated knife, cut diagonally into ¾ inch wide slices.  Place the slices on their sides on a rack that has been placed on the baking sheet.  Leave a little space between slices.  Bake @ 275 degrees F for 15 minutes, turn slices to the other side and bake for another 15 minutes.  Biscotti should feel dry and be golden brown.  Remove rack from pan and allow to cool completely. 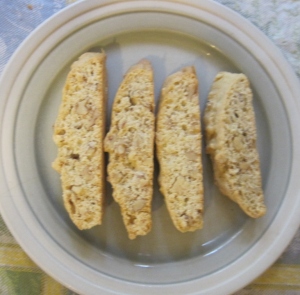 I adapted this recipe from one I saw a couple of years ago on Crockpot Recipe Exchange.  It was easy to mix the ingredients and let them cook in the slow cooker for about 2-½ hours.  The result was delicious – cheesy with a lot of chicken  and a delicious flavor.  I used the coriander chutney and didn’t need any additional seasonings.  You might want to taste and add salt, pepper or some kind of hot sauce.  I used this as an entree and it made a nice lunch for three people with leftovers for supper.

NOTE:  STIR EVERY 30 MINUTES TO BE SURE THE CHEESE IS MELTING.

I like to serve this with Tostido scoops.  Mixture can be kept warm in crockpot for up to 2 hours.  Reheat leftovers in the microwave or in a small pan on the stove.  This dip should be piping hot. 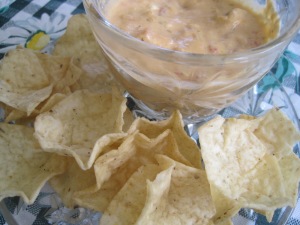 One of my Christmas gifts this year was a small 4-½ x 6 inch leather bound book engraved “Cooking Recipes”, purchased at an antique mall in Sugar Creek, Ohio.  The pages are edged in gold and there are 10 index tabs for food categories.

The real gold in this book, though, is the collection of handwritten recipes.  There aren’t a lot of recipes – just 25, 22 of which are desserts.  The book itself could have been from the 1930s, but I believe the recipes are from the 1945-1950 era.  This is based on a lot of recipes calling for shortening, for using the word “oleo” rather than margarine in most recipes and the attention given to oven temperatures.  I believe it’s post-World War II because of all of the sugar-laden desserts.

The handwriting is clear and ingredients are listed correctly, although most of the recipes give no idea of how the item is to be prepared, what kind of pan to use or how long to bake.  That’s why I’ve decided to make each of the recipes, using the products specified, and adding my own instructions.  I like to think that the woman from the 1940s kitchen (who would have been about my mother’s age) would enjoy having someone fuss around with these recipes again and turn out some delicious food for the family.

For my version of these two recipes, I used ¼ of the ingredients to make smaller amounts.  The popcorn balls are easy and a good buttery snack.  My only change was to substitute butter for oleo (margarine) and a dash of salt.

The Pastel Milk Punch is somewhat like a smoothie and I used the modern convenience of a blender rather than stirring as the 1940s cook did.  I also used frozen strawberries and omitted the sugar.  The only mint ice cream I could find had very fine chocolate chips in it which didn’t do any harm except for clogging the straws occasionally.

Both items, like the other recipes in the book, are rather mild.  My daughter wasn’t feeling well and drank two large glasses of the punch, saying that it settled her stomach.

In a large pan, melt the butter over low heat.  Add the marshmallows and salt.  Cook, stirring constantly, until marshmallows have melted.

Add popcorn to marshmallow mixture and stir to combine.  As soon as the popcorn has cooled down enough to handle (don’t let it cool completely), butter the palms of your hands and form balls of the mixture.  I chose to make 10 snack-size two-inch balls.  Any spare kernels that can’t be formed into balls can be a snack for the cook. 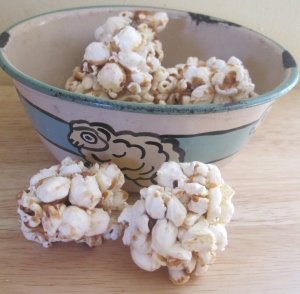 Yield:  3-4 servings, depending on size 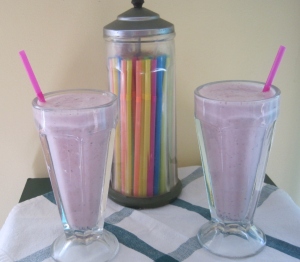 This little planter (marked Japan on the bottom) was always in my Grandma Helen’s living room in the 1940s and until I inherited it in 1978. 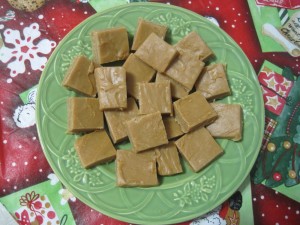 If you’re looking for an easy item to add to your New Year’s Eve snack table, this might be just right.   Make it early in the day to allow for a 3-4 hour chilling period.  Or make it days ahead of time and store at room temperature in a closed container.  It’s my favorite peanut butter fudge because the peanut butter flavor really comes through.

Line two 8 inch plates with foil and butter the foil.

Have the peanut butter and peanuts measured and at hand.

In a large saucepan over low heat, place peanut butter chips, condensed milk and salt.  Stir constantly until chips are melted and mixture is smooth. 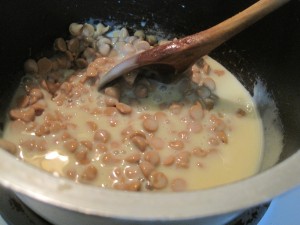 Remove from heat and stir in vanilla.  Add peanut butter and stir until smooth. 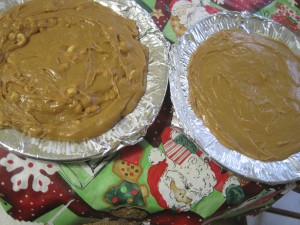 Cover with foil and refrigerate for 3-4 hours until the top of the fudge feels solid to the touch.

Remove foil and cut into squares.

Of course, you could make the entire mixture with peanuts by using the full one cup or eliminate the peanuts entirely for a creamy plain peanut butter fudge.

Once fudge is set, it can be kept at room temperature in a covered container. 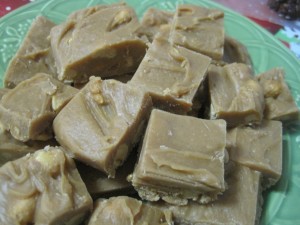 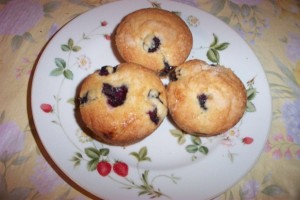 These little teacakes are just right to serve with cold lemonade on a hot summer day.   They are not as thick as muffins and make a nice afternoon snack.

Note:  There is no milk in this recipe

In large mixing bowl whisk together the oil, sugar, eggs and vanilla.

Place blueberries in a bowl.  Measure the flour and from this, take two tablespoons of flour to mix with blueberries.

Spoon mixture into greased or lined muffin tins.  The mixture will be thick. Sprinkle the tops with sugar. 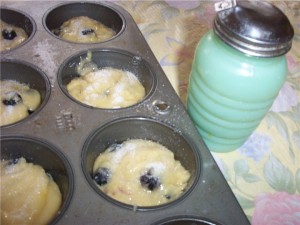 Bake @ 350 degrees for approximately 25 minutes.  Let pan cool on rack for 3-4 minutes, then remove cakes to rack to cool. 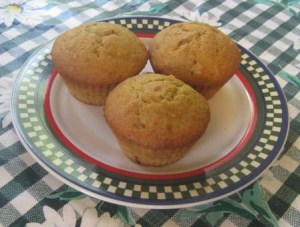 I first made these muffins in 1987, adapted from a recipe I found in a library book, Colonial Old Treasures. The muffins are nice for breakfast or snacking – not too sweet, a good texture, and a “must” for me – full of walnuts.

In a medium bowl, whisk together the flour, salt and soda.  Set aside

In a separate medium bowl, whisk together the sugar, egg, oil, orange juice and lemon peel.  Stir in the reserved flour mixture just until the dry ingredients are absorbed.  Stir in the chopped nuts.

Divide among 12 greased muffin tins or 12 silicone baking cups.  Bake @ 350 degrees F for approximately 25 minutes, until tops are golden brown and a tester inserted in the center of a muffin tests done.

Let rest in the pan for 5 minutes, then remove and let cool on a wire rack.

Yield:  12 muffins.  Leftovers can be warmed in a 350 degree F oven.  Muffins can also be frozen. 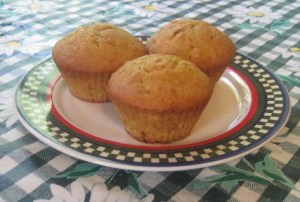 I have a large collection of county and state fair cookbooks, and this recipe came from an Indiana county fair book, 100 Blue Ribbon Cookies. The cookies are baked in a large jellyroll pan, 15x10x1, so you get a lot of thin, delicious bars with apricots and nuts plus a tart lemon glaze. 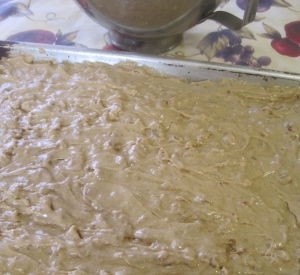 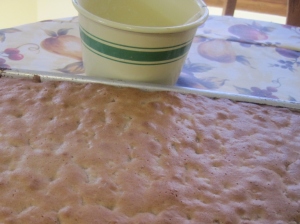 Mix sugar and lemon juice together to make a glaze.

Cut into squares and continue to cool on wire rack.

In my recipe binder, I have a note:  First made June 10, 1995 to take to a picnic on Brookville Lake in Brookville, Indiana.  Everybody loved them. 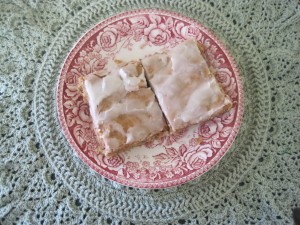 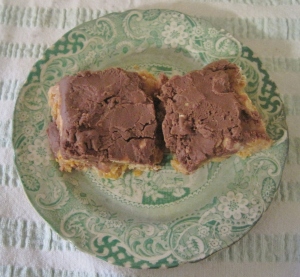 My husband, David, was so proud of the 40 years he worked for Good Samaritan Hospital (Cincinnati) and he was proud of anything that Good Sam did such as distributing a small cookbook in 1982.  I found this recipe for Baby Ruth Bars in the book and made them for him to take in his lunchbox.  It’s a cross between cookie and candy, but either way makes a nice snack.

To make the bars: In a buttered 9×9 dish place the cornflakes.  Sprinkle the peanuts evenly over the top.  Set aside.

In a small pan over medium high heat combine the granulated sugar, brown sugar and Karo syrup.  Bring to a boil, stirring occasionally, and boil for one minute without stirring.

Remove from heat and stir in peanut butter.  Pour this over the cornflake/nut mixture.  Butter your hands and gently press down on the mixture. 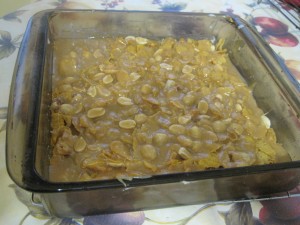 To make the frosting: In a small saucepan over low heat, stir until melted the chocolate chips, 1-1/2 Tblsp. peanut butter and the butter.  Mix well and spread over mixture in baking dish.  It’s OK if some of the peanuts peek through.

Place on a wire rack and while still warm, cut into 16 bars and remove from baking dish.  If you forget to get them out and the caramel is sticking to the bottom, place the glass dish in the microwave for 30 seconds or so.

These are really good. 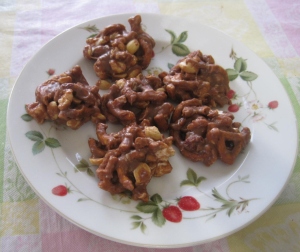 After snacking for a month on Rolo Pretzel Candy, I found myself with a lot of leftover broken pretzels.  I looked around on the internet and put several ideas together to get this candy which is quick to make, delicious, and uses up broken pretzels.

In a large bowl, combine the pretzels, marshmallows and peanuts.  Set aside. 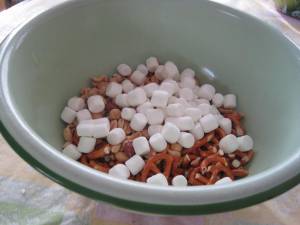 In a heavy medium saucepan, place the sugar, evaporated milk and butter.  Cook over medium heat, stirring constantly, until mixture comes to a full boil – bubbles across the top surface. 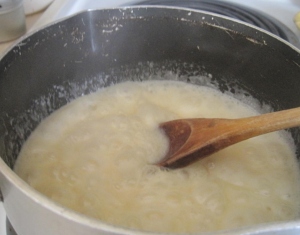 Remove from heat and add peanut butter chips and milk chocolate chips.  Allow to stand for one minute, then stir to combine.  Allow to rest for 5 minutes.

Pour the chip mixture over the pretzel mixture, stirring to coat.

Drop by rounded teaspoon onto two wax-paper-lined baking sheets, using your fingers to press the molds together.

Chill until firm.  Store in a tightly covered container in the refrigerator for up to one week.  These also freeze well.  I like to put 2 or 3 in a zip-lock bags for freezing and to keep me from eating too many at one time. 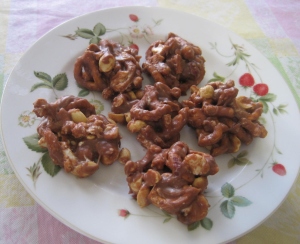 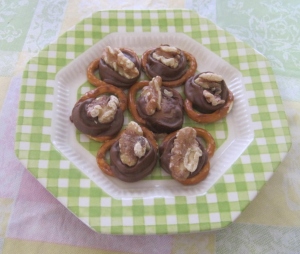 I found this idea several places on the internet and it was our snack of choice for the month of December.  It’s very easy and very delicious.

Place round pretzels on the foil-lined sheet.  Unwrap and place a Rolo candy piece on each pretzel.  Place in the preheated 300 degree F oven for 3 minutes.

Remove from oven and immediately press a piece of nut into the top of each Rolo. 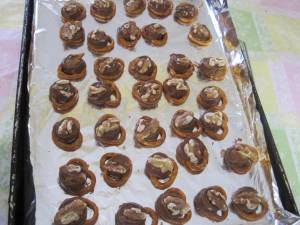 Place in the refrigerator to chill for 10-15 minutes.

Place some Rolo Pretzel Candy on a plate and watch it disappear.